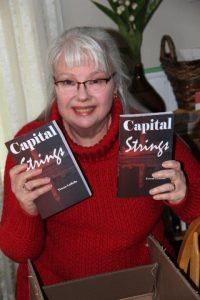 The Amazon box with paperback copies of my fifth novel dropped on our front porch two weeks and three days after the official release on Amazon on April 19th.  The date in this work of fiction when Prime Minister Evan Reid risks it all.

The story idea began with the pandemic. The toll the crisis was taking on the people, the economy and government leaders trying to cope and communicate the constantly changing facts from experts married the plot in “Capital Strings” to introspective character development and intimate relationships.

The mass shooting close to my Nova Scotia home last April, the ban on assault-style weapons by the Liberal government and the July 2020 attempt on the prime minister’s life shaped the storyline of the book I was writing.

How would our lives be different after covid-19? I set the story three years in the future, post-pandemic, in the fictional majority government 2023 federal election year.

Evan Reid, the teacher turned politician whose commitment to country robs him of the family time and life he cherishes. Jerilynn Connor, the prime minister’s loyal chief of staff whose RCMP husband’s past threatens their future. These fictional characters tell their very personal stories from the very impersonal world of public scrutiny.

My first political thriller set in the capital city of my new home country Canada. Who would have thought my love of storytelling would take me here. Not me. No way.

So what’s next? Case #2 in The UnMatchables romantic suspense series and more from Parliament Hill. A character featured in both books will play a pivotal role as the stories unfold. I can’t wait to introduce you to Lucas Dominguez, Canadian diplomat and refugee immigrant with a past he’d like to forget and a future he may not avoid.  I’ll tell you more as I know it. What I can tell you is, as in all my novels, there’s food, wine and Canadians featured somewhere in the chapters between the covers.