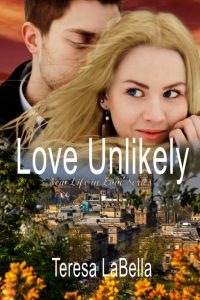 “The sights and sounds of Scotland, especially Edinburgh, are a welcome backdrop to the romantic adventures. This author never disappoints.” – Misty U.

Telling the stories within for readers to enjoy keeps me dipping into the well of my imagination, creating characters we’ll fall in love with together.

Rachel’s life began in the final pages of Heartland, the middle book in the New Life in Love trilogy. Darien closes the book on his love and life revealed in Reservations, hums a lullaby to his infant daughter, and snuggles against his wife Miranda, pregnant with the sibling to Marisa the couple had wished for in the new year.

Marisa’s coming-of-age story takes center stage in Belonging. The sisters’ loving bond becomes mired in guilt, blame and anger after their father’s death.  A reader who faithfully followed and loved the three-part McKenna family saga saw Rachel as the whiny and self-centered baby sister who complained too much about missing senior prom.

That’s not how I intended my readers to feel about Rachel. The big sister she’d grown up with had just moved far away from their Iowa home. The father she adored was gone. Her mother’s erratic behavior caused by unbearable grief abruptly forced Rachel into the role of caregiver. The care free senior year in high school she’d anticipated was ripped away. She resented Marisa’s fairy tale life in love with Alistair in the Scottish Highlands.

The trilogy I’d thought had ended needed a post script. Rachel deserved the promise of happily-ever-after.

As do all of us who choose a New Life in Love.

This fast-paced and light-hearted novella offers a sweet look at the ongoing happy ending of Marisa and Alistair MacKenzie, the Midwest chef and Scottish farmer who fell in love in LaBella’s novel Belonging. In Love Unlikely, Rachel, Marisa’s younger sister, comes to visit the new family in Scotland.

Rachel is sharp-tongued, guarded, not easy to get along with, and firmly encased in a thick protective shell. Drew MacKenzie, Alistair’s brother, isn’t delighted when he gets appointed her airport chauffeur, but he could use the time away from problems at work with the third brother, Charlie, who doesn’t like Drew’s shoot-from-the-hip style. Rachel and Drew seem to fall in love mostly from proximity; she gets a kick out of teaching him to ride, and he decides he likes her once he finds her sipping coffee in a peek-a-boo pink bathrobe.

There are several cameos by characters that readers of Belonging will recognize, and some poignant remembrances of talk of Darien (the love interests in Reservations and Heartland), though I admit it surprises me when characters call Alistair “Ali,” because my favorite character in the series is Ali from Reservations. She isn’t even a memory for Drew and Rachel, but after all, it’s their story.

And a whirlwind romance it is. After one shellfish dinner in Edinburgh, Drew and Rachel are swearing undying love for one another as they tear off clothing–it’s saucy, sexy fun, and makes you want to know that recipe! Of course there are a few kinks to work out–Rachel’s not entirely shedding her guarded, protective nature–but Drew is convinced, either by her charm or that little black dress, that he has to have her, and will stop at nothing to persuade her they’re meant to be together. The sights and sounds of Scotland, especially Edinburgh, are a welcome backdrop to the romantic adventures. This author never disappoints. – Misty U.