Get your copy at
LaHave River Bookstore and
Pharmachoice in Caledonia
on Nova Scotia’s scenic south shore!

The fate of a nation and lives on the line 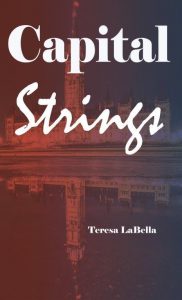 The Prime Minister promised to keep Canadians safe. Everyone who voluntarily rolled up a sleeve got vaccinated against a deadly virus. Reid pledged to ban ownership of assault-style weapons manufactured only to kill people. Done and now law.

The Prime Minister’s amendment to the weapons bill has mobilized more than the official opposition.

“I hold a string that’s connected to every person in this country, every country in the world. It’s only one string of many. But if I pull it too hard and it breaks, the chain reaction I start could be catastrophic.”

Congratulations Teresa LaBella
This book moves in a page-turning tempo. Also, how refreshing to find a political thriller set in Ottawa instead of Washington. LaBella weaves a terrific story through the policy-making world and workings of Parliament Hill. It has plot, tempo and drive.

Capital Strings is a real page-turner!

This political thriller kept me turning the pages from start to finish. Living two hours away from Ottawa makes this book even better for me. The characters are interesting and the storyline is well written and riveting. This is the first book I have read by this author and I am looking forward to reading more.

A gripping read
This is a refreshing change to most political thrillers in that it’s set in Canada. It’s a great read with enough layers to keep you engaged. I’d recommend picking it up for sure.

Everything that readers of political thrillers crave
There’s plenty of action, lots of intrigue, and is populated with unforgettable characters. The potential for spoilers in reviewing a book like this is great, so I’ll leave it to you, reader, to order this book today, and immerse yourself in this world. Further cause for rejoicing: it is billed as Book #1 of the Capital series, so more excellence to come!

A political thriller/romance with lots of twists and turns
The varying points of view take a little getting used to but it works. Interesting to read a political story from Canada instead of the US. Good character development and dialogue.

Recommended to anyone who loves intrigue!
Ms. LaBella is a fantastic storyteller. I was hooked by Capital Strings from the first page. Her characters are well-developed and the storyline is written in such a way, the reader can’t wait to find out what happens next.

A well-written, immersive and timely political suspense tale
Teresa LaBella’s page-turner is very effective in weaving the key characters’ relationships throughout the novel, leading up to a captivating, climactic end. This is the third book I have read by the author and I find her stories well-researched, compelling and filled with fascinating intricacies. “Capital Strings” kept me very engaged and I look forward to reading more of LaBella’s excellent work!

Capital Strings is a treat!
I enjoy LaBella’s romances, but I like this turn she’s taken toward suspense. “Capital Strings” is exciting, high-stakes political drama that peeks into the worlds of the ultra powerful. There are several points of view on offer, but the top four are the most engaging. Alec has the classic tough shell guarding a soft exterior, and efficient Jerilynn secretly wants to chuck her high-pressure job and be a mom. Then there’s Willie, a hangdog, pitiable security guard who provides a shocking twist. The emotional heft is carried by Prime Minister Evan Reid, a former teacher turned politician and a genuinely nice family guy. All in all, with lots of guns, lots of sex, and lots of sizzle, the pages fly by.

Filled with suspense, intrigue and, yes, even a bit of romance
Capital Strings is a departure from the wonderful romance novels penned by author Teresa LaBella, but this book proves LaBella can write in any genre. As with her love stories, LaBella’s detailed descriptions allow the reader to create a mental picture of the characters and locations. One can even imagine which actor would be cast for each person if the book became a movie. The story revolves around the prime minister’s attempt to ban handguns in Canada after another mass shooting rocks the country. His wife has already grown weary of him spending so much time away from her and their children. The controversy surrounding the bill gives her leverage to urge her husband not to run for another term and return to teaching. His chief of staff and best friend worries about a possible assassination attempt and urges her husband, the head of Parliament security, to provide extra protection for the prime minister. Just who is behind the threats? Will the prime minister survive? Will Parliament vote to ban handguns? Solve the mystery by reading Capital Strings. You won’t be disappointed.