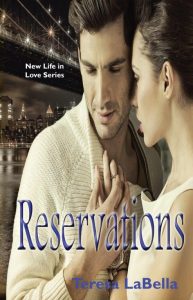 Sparks fly and desire ignites between reluctant lovers who got burned when they looked for everlasting love with the wrong partners.  Both Alison Clarke and Darien McKenna escaped into successful, high-profile careers – she as a self-employed business owner of a successful media consulting firm in Brooklyn and he as executive chef at an upscale restaurant in mid-town Manhattan.  Can chemistry and shared delight in food, wine, and film bridge the age gap and resolve mutual reservations about their longed for happily-ever-after?

Alison Clarke and Darien McKenna embark on an improbable adventure that neither could have alone in Reservations.

The solitary yet satisfying lifestyle Alison carefully crafted for herself through hard work and determination is upended when she meets the uncomfortably good-looking Chef Darien McKenna at a charity gala to feed the hungry of New York City.

Despite doubts about his availability and their obvious age difference, she makes a reservation for one at Chez Nous, the upscale mid-town Manhattan restaurant where Darien commands the kitchen, hoping to attract the attention of the handsome executive chef.

The rapid pace of the lovers’ passionate romance begins their journey to discover if love is ageless when it’s meant to be.

Purchase Reservations  as a Paperback or on Kindle!

Link to buy the 3 books, signed by the author My store for personalized books

I read for more than 8 or more hours a day at my job as a newspaper copy editor. Quite often it is a challenge to get me to pick up a book during my leisure time. Not so with “Reservations.” This scrumptious romance novel whet my appetite from the very first page. I did not want to put it down until I had sampled every tasty morsel. The story revolves around Alison Clarke and Darien McKenna who, after being hurt in past relationships, have put romance on the back burner while concentrating on their careers. But after Ali, a successful media consultant, has a chance encounter with a handsome chef 20 years her junior at a charity auction, she is ready to take a chance on love again. Craving to get to know Chef Darien better, she makes a reservation to dine alone at his Manhattan restaurant. Her plan works as Darien leaves his kitchen duties to join Ali at her table. The conversation goes so well that Ali invites Darien home for … let’s just call it a sweet and satisfying dessert. At first, Ali is not certain the relationship will last, but after spending more and more time with Darien, including an awkward Thanksgiving dinner/first meeting with his family, Darien convinces Ali that she is the woman he wants to be with for the rest of his life. The character descriptions and attention to detail by author Teresa LaBella are fantastic. I can picture myself walking into Ali’s office and striking up a conversation with her as if we were old friends. And as a woman who doesn’t care for cooking, I would welcome Darien into my kitchen at any time. I am sure he would make preparing a meal a fun experience. I highly recommend you make a reservation to read this novel. A warning, however: it may make you hungry to taste other entrees from LaBella. – Lucinda R

OK, let’s get this straight. I don’t read romance novels … I mean, EVER. But I picked up “Reservations” and literally couldn’t put it down until the last page – and then I was sorry that this terrific story had come to an end! The characters of Ali, the classy media consultant  from Brooklyn, and the younger Darien, the Manhattan chef, are so well-written I feel as though I have known them for years. Add to that the wonderful, and accurate, descriptions of various New York environs, believable drama (not too heavy-handed and true-to-life) and you have a perfect novel, one that deserves to be developed into a screenplay. This is a fun read, with characters you will appreciate and remember. I’d love to read a sequel! – Linda C

How refreshing that “Reservations” is not a love story either beginning or ending in tragedy.  Instead you have the story of two people separated by age, education, occupation, and life style who appeared to have given up on love but find passion and a kindred spirit in a New York City setting.  The author leaves no doubt in the mind of the reader of the passionate love they share.  Where this love takes them is a mystery this reader looks forward to discovering in the next novel of the trilogy. – Susan C

LaBella’s book, I am happy to say, offers romance with a feminist twist. The heroine, Alison Clarke, is an established career woman and entrepreneur who likes her job and is neither exhaustively driven by it nor left empty and longing for a man to complete her, which is how the career woman is usually introduced in our romantic comedies, romance novels, and recent films like Jurassic World. Ali is already satisfied with her life when the novel opens, happily single and content with her ambitions and her accomplishments. She has a strong circle of friends, a home she adores, and work that fulfills her. It’s a refreshing change from the usual.

Admittedly, this is a difficult opening to pull off for a novel, since there’s no internal motive or need to will drive the heroine into the hero’s field of vision. In fact, she has to have her arm twisted by her charming gay sidekick, tenant, and neighbor, David, to even go to the charity gala where four-star chefs are vying to impress the well-heeled guests. When tall, incredibly handsome Chef Darien hands her a place of bruschetta, Ali remarks on his ingredients. It is her combination of knowledge and impeccable taste (he will later be struck by her wine pairing with his signature heirloom squash soup), along with her well-maintained figure and elegant, classic style, that catch the hero’s eye and his interest.

The second feminist twist is the age difference between the leads. Ali is twenty years older than Darien. She is not a cougar, with the implications that a mature woman (less desirable because less prepubescently smooth and firm) is desperate and preying upon whatever male flesh happens across her path. Nor does she consign herself (because supposedly no longer able to compete for male attention) to celibacy for the remainder of her life. There’s no indication that Ali either feels the lack of a male companion or any agony about her age; she does, after all, have the witty, fun, stylishly hip David around whenever she wants him, and sometimes when she doesn’t. Again, while this diminishes the opportunity for tension and conflict in the novel, it does make for a character I can like and even celebrate.

Unlike the traditional romance narrative, where the man stalks and tempestuously woos a half-willing heroine through seduction and challenge, Ali has and maintains the upper hand throughout the relationship. What this does for the narrative is remove much of the conflict and tension that make a story crackle. But this also sends the welcome message to readers that there’s nothing wrong with an older woman deciding she wants to make a reservation for one and check out a younger, handsome man at his workplace. When Darien comes to her table like a fly to honey, she invites him on a date. She takes him out to dinner and she drives. Then she invites him back to her apartment for a late night cocktail, hands him the leash to walk her dog, and meets him upon his return wearing a shimmering negligee that means he will be going nowhere that night. The result is, Darien never leaves. There’s little doubt this script will unfold exactly as planned and Ali will get exactly what she wants, but Darien wants it too, and their coming together is the conjugation of two consenting adults who admire and are genuinely interested in one another. As a fantasy script, I’m all for it.

The most fantastic element of the novel, perhaps, is that the age difference doesn’t seem to matter a bit to either of them. In real life, one imagines that it would. Twenty years is a generation gap in terms of cultural references and reproductive urges. But this is resolved rather easily in the book. It turns out Ali and Darien like the same movies. It turns out he’s more than happy to give up his bachelor pad and his shabby furniture and move into her luxe Brooklyn penthouse with her linens, her jetted tub, her fireplace, and her wine fridge. When his family displays trepidation that he has fallen in love with a woman much his senior, Darien argues them into submission. David gracefully steps out of the picture by having the good sense to fall for a cute boy-toy of his own. And Ali’s cousin and closest friend Patrice, who knows her better than anyone, doesn’t seem to feel a hint of apprehension about this pairing, maybe because Darien bears such a striking resemblance to Bradley Cooper.

While this doesn’t make for a riveting, page-turning type of read, it does offer a sweet, soft-lit fantasy that can perfectly satisfy a reader longing for less suffering and more romance. This reader recommends you pour a glass of wine (or, if you wish, grab the whole bottle), turn on the fireplace, pull the warm quilt over your feet, and drop into the liberating softness of this book. It will give your feminist sensibilities a satisfying boost.

(And then, when you’re done, you can move on to “Heartland” the second book in the trilogy, and see what further adventures are in store for these two.) – Misty U

Thank you, Femmeliterate editor Misty Urban, for providing yet another source to connect authors wit ...

Thank you Writera Magazine for featuring me and “The UnMatchables”! Sounds like this is ...

It’s easy to conjure the specter of Ebenezer or wear the green-faced Grinch scowl and Debbie Downer ...

The Day Before Book Bums

For two hours, authors will ask each other three questions from the comfort and safety of the space ...

Question #3 from my fellow Book Bum Workshop authors: What are you looking to tackle next year? Answ ...

Question #2 from my fellow authors virtually attending this annual workshop: What do you need help w ...

Saturday workshop question #1: What have I worked on and/or learned in the past year? A timely move ...

Book Bums authors will meet virtually this year. For the first time, our tribes of loyal and new rea ...

The fate of a nation and lives on the line Prime Minister Evan Reid “I hold a string that ...

“Happy Birthday, Daddy” “Well, hell-OOOH.” I grin at the sound of the steady ...